Beyond hardware: how a portable sink can inspire behaviour change

Despite having a cheap and simple fix that could prevent millions of deaths (handwashing), how to encourage it has puzzled experts for years. The rate of handwashing with soap after using the toilet is still estimated to be only 16%. So how do we get people to wash their hands? Geoff Revell explains how the HappyTap creates new ways to target behaviour. 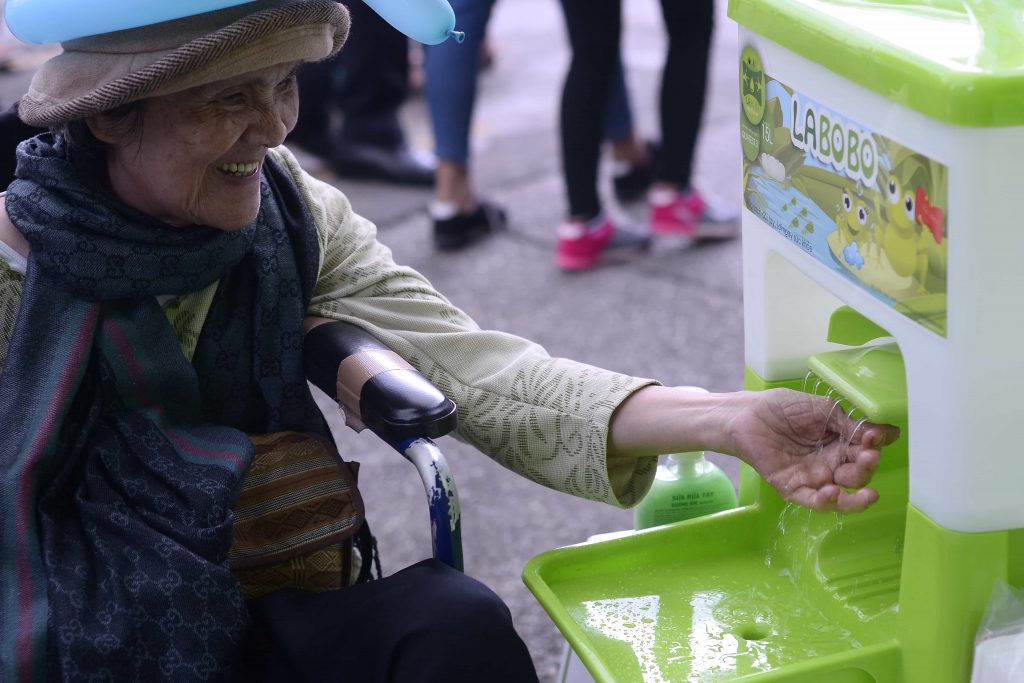 Despite having a cheap and simple fix that could prevent millions of deaths (handwashing), how to encourage it has puzzled experts for years. The rate of handwashing with soap after using the toilet is still estimated to be only 16%. So how do we get people to wash their hands?

Awareness campaigns have long been the mainstay of public health efforts to improve handwashing, but on their own they are typically unsuccessful. A multi-year, large-scale behaviour-change campaign in Vietnam, led by World Bank and funded by the Bill & Melinda Gates Foundation, put the challenge in focus. The evaluation of the campaign concluded: ‘the intervention led to an increase in knowledge’, but ‘handwashing with soap behavior in the target population has not changed substantially as a result of the intervention, and thus no health or productivity impacts are found’.

Unfortunately, there is a persistent gap between knowledge and action; after years of education and promotion, many families understand when and why to wash their hands, but still aren’t doing it. Various studies, including one from Kyrgyzstan, have shown a link between the presence of handwashing facilities and rates of handwashing, suggesting a possible causal relationship. But is having more sanitary hardware enough to get people to routinely wash their hands?

It’s unlikely that any single intervention would be a silver bullet. However, although sanitary hardware might help improve rates of washing, we can go beyond the physical hardware and use facilities to reinforce and build on awareness. The HappyTap is the first such hardware designed with behaviour change front and centre. It’s a portable sink that not only delivers functionality, but also inspires change.

How can a handwashing station be more than the sum of its parts? Three crucial elements in the design and marketing help boost its success:

1. Basic infrastructure is not enough

For decades, little has changed in the way government agencies and NGOs have approached hand hygiene – it has mostly been through awareness-raising. Some organisations recognised the lack of convenient infrastructure as an issue, so promoted construction of makeshift handwashing stations, such as the Tippy Tap, out of old buckets or jugs. Most hygiene promotion materials still use images showing the steps to wash your hands, or images of stylised germs being attacked with soap.

The relatively low emphasis on encouraging construction of handwashing stations is not entirely surprising. Most rural households in low-income settings do have some form of water access that could enable families to wash their hands. In Southeast Asia, large rainwater jars, wells, and even taps outside the home are almost always present. Each of these could provide the physical means for handwashing. So we often conclude that what must be missing is people’s appreciation of the mechanics (how) and benefits (why) of handwashing.

Following that logic, a customised portable sink would be superfluous. But if many people do know the theory of handwashing, and many homes have infrastructure that could be used for handwashing, then why are they still not doing it?

We speculated that what’s missing is infrastructure designed to motivate people to wash their hands. So we tried treating people as consumers with complex wants rather than beneficiaries with basic needs.

We spoke with mothers in Vietnam’s Mekong Delta region, and learned that many were frustrated because their children were spoiling rainwater meant for cooking and drinking by washing their hands. We learned that a makeshift solution is embarrassing because it makes a family look low-status and poor. We learned that a portable solution enables indoor handwashing – a potentially game-changing luxury rarely found in rural homes. Mothers desired something different, modern, and purposeful.

We also learned that the opportunity to leverage infrastructure for behaviour change is not limited to rural settings. Today, we see the HappyTap in schools, hospitals, and urban homes. We originally discounted these places because they already had sinks, but in many schools and clinics the sinks are inconveniently located outside the building, and, in urban homes, are often too high for children.

At this year’s Handwashing Think Tank in London, Bob Aunger of the London School of Hygiene and Tropical Medicine discussed habit formation. He argued that our lives and homes are organised in an order that sparks a chain reaction of activities – finishing one thing reminds you to start another.

Although these routines can evolve or change over time, people mostly do not plan consciously nor even engage deliberately in household activities. Accordingly, objects are placed strategically to facilitate the most efficient sequences. Soap, toothbrush and toothpaste are kept in convenient, visible places near the sink. Picking up the toothpaste after the toothbrush feels like second nature, but these are learned and practised behaviours. Repeated behaviour sequences, visual prompts, behaviour modelling, and convenient infrastructure are all important to form new habits.

During the HappyTap design process, habit formation was front of mind. What were the barriers that prevented people from washing their hands? How could a product help shape the environment to prompt them?

We found rural mothers often did not wash their hands before cooking or feeding a child, despite being well aware of the risks. Many kitchens in rural homes across the Mekong region typically do not have a sink, so handwashing is not only inconvenient but hard to weave into a habitual routine. Designed with a wastewater tray, the HappyTap is the only low-cost portable sink that can be placed indoors. In the kitchen, the bright green device is hard to miss and visually prompts mothers and their children to wash their hands. In urban homes, it can be placed at eye level for young children, making it an effective teaching tool for kids as young as 18 months, and helping establish a lifelong good habit.

The HappyTap’s distinctive features were carefully scrutinised and altered during the design phase on the basis of customer feedback. We will improve and adjust it to suit new markets with different contexts and preferences, but scaling it up to change the landscape of hygiene promotion will not happen through incremental hardware improvements.

The more important and challenging success factor is to develop a relentless focus on commercial distribution and marketing. We are investing to establish the right mix of product, price, place, and promotions to trigger consumer adoption and lasting change. If we don’t deliver on every one of the four Ps, the HappyTap would simply be a glorified bucket instead of an integral part of a sophisticated behaviour change scheme. Our promotional and sales activities look to hit the right messages to provoke consumer action, and our work to build distribution networks aims to make it affordable and widely accessible.

We tested marketing messages extensively to better understand motivations to purchase and consistently use the HappyTap, and confirmed that the classic images of the ‘six steps to handwashing’ fail to inspire change. Families were de-sensitised to warnings of illness and death, perhaps due to having heard them many times. Instead, they were motivated by emotional aspirations, and needed to justify their purchase with rational health messages. By linking handwashing to a bright and prosperous future for their children, while highlighting its novel and modern visual appeal, we are persuading families to invest in, use, and prominently display a handwashing device.

It’s no secret that families could spend a fraction of the cost of a HappyTap on a bucket or jug that ultimately functions the same way. But they don’t. And programmes that promote handwashing through awareness raising have struggled to make headway. We looked at the problem from a different angle and decided to combine low-cost hardware with promotional campaigns in one package that moves people to routinely wash their hands. We hope that it will represent a key piece of the puzzle to enable lasting change in the global hygiene landscape.