UK Businesswoman leading the fight against COVID-19 in schools 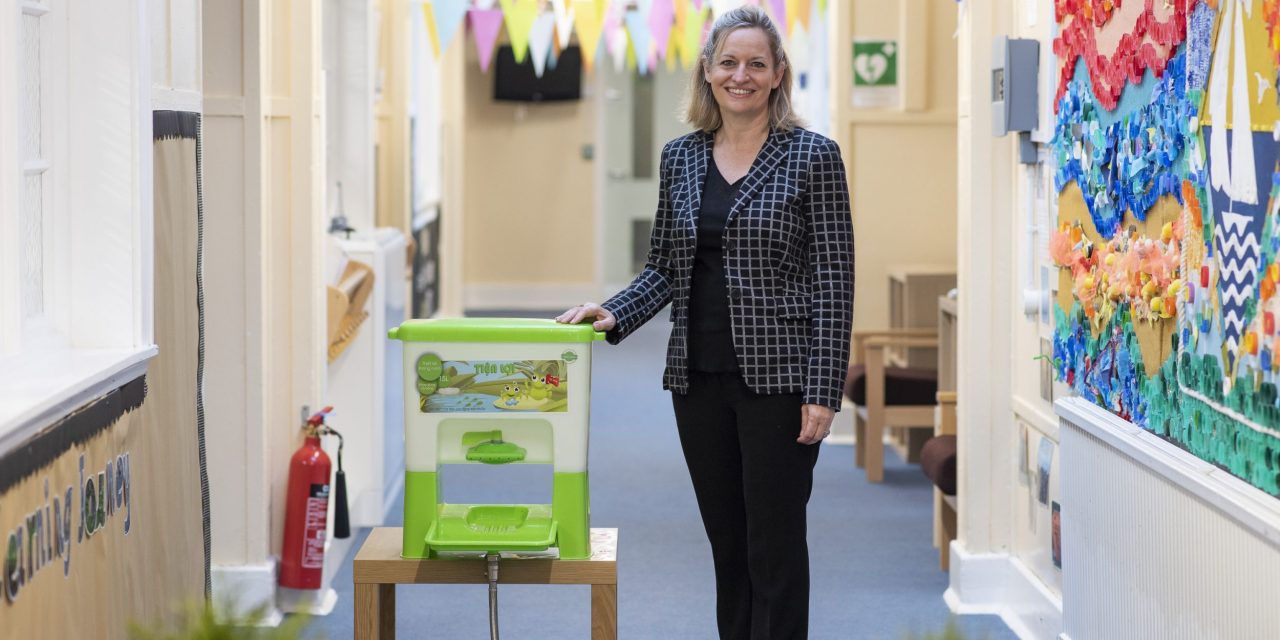 A businesswoman, executive advisor and coach who spent 30 years living and working in Japan has returned to the UK and brought with her a cost effective yet simple idea to keep children safe against Covid in North East schools.

This experience was the impetus for Vikki dedicating her future career to supporting social enterprises increase their impact, particularly in the hygiene sector. After leaving Japan in 2018, she joined the boards of two exciting social enterprises, a portable toilet company in Ghana (Clean Team Ghana) and a waste processing technology in the U.K. (Wase Ltd.), and became an executive advisor and coach to others including HappyTap based in Cambodia.

HappyTap produces the world’s first affordable, portable sink and water storage tank designed to encourage handwashing behaviours amongst children in challenging environments; it features a brightly coloured base with fun decals, and a tap designed for small hands. It is sold commercially for use in homes and thousands have been bought by aid agencies for distribution across the world for schools and health facilities.

As COVID took hold in the U.K. and the government emphasised handwashing was key to preventing the spread of the disease, Vikki realized HappyTap could support schools in the UK struggling to provide enough handwashing facilities to adhere to government guidelines.

“Covid has been an enormous leveller; it is wreaking havoc across the world regardless of location or wealth. HappyTap was borne from the need to improve hygiene in challenging environments where deadly infectious diseases are rife. Hence the development of a robust, affordable, portable sink designed specifically to develop good handwashing habits in children. It’s also a great example of reverse innovation; how a product adapted for use in another part of the world can be usefully introduced and, in this case, be used to protect our own school children, “said Vikki.

The HappyTap has been successfully trialed in Durham schools where the equipment has drastically cut down waiting times during lunch and breaks for children to wash their hands and given older schools with limited washing facilities more options. Schools across the county will have them by the new half-term.

Now, a North Tyneside school has also recognized its potential. The HappyTap is now being used in Sir James Knott Nursery in Tynemouth and head teacher Mr. John Croft is already seeing benefits:

“The unit is specially designed for children to use easily and each holds enough water for about 60 washes. It’s making washing hands so much more fun and less time consuming for our young people. Use of hand sanitizers can be more difficult to supervise effectively, and can cause some skin complaints – soap and water are always the best. It’s such a simple idea yet it’s very effective,” he said.

“HappyTap’s mission is to provide robust, accessible handwashing facilities to 10 million people by 2024. In addition to making a real difference to the safety of young people in our region, for every ten units sold in the U.K., one will be donated to a school in a low-income country extending its impact to children who face significant hygiene risks on a daily basis. We have committed to donating 80 units to schools in Vietnam in just the last month, benefitting more than 2,000 children,” said Vikki.